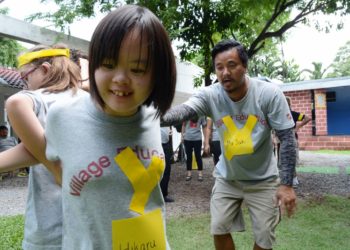 When you look at what the school is like today, with the staff and students from 17 countries around the world, and parents who have relocated to Thailand so their child could be enrolled at our school, you can see just what has been achieved. I’m sure you will agree that The Village has come a long way from those early days.

The Village celebrates its 17 years this week. On 09/09/1999 The Village first opened its doors in a small room in Bangna. It started with just one student.

The concept of a small caring and supporting environment was shaped by my own experiences of early education. My story started in England. We had migrated to England from India when I was just four years old. By the time I was 6 I knew I was different at school. I was slow to copy from the blackboard (which we did a lot of). I would make “silly spelling errors”. I was struggling to read and write. Some of my teachers put the delay down to English being a new language for me.

In the first two years of secondary school I was still struggling. Many of my teachers deemed me as being a “slow learner” and I was pulled out of mainstream classes and put together with a group of other students who were also struggling to keep up with their counter parts. One year later, I was lucky to have a new teacher arrive at our school. She was young and full of new ideas and wanted to try new ways to engage this group of “slow learners”. It was she who sparked the interest of education and learning for me. With her help and encouragement I managed to secure a place on a degree course, a bachelor’s in education, which I would go on to pass with honors.

After finishing my degree, I didn’t head straight into teaching, as my peers did. I applied and was accepted as an Education Welfare Officer for the prestigious Royal Borough of Kensington and Chelsea (London). It was there that I learnt the complex mechanics of the education structure and how it all impacts children with special needs. I was then accepted as a special needs teacher at Holland Park School in London, another prestigious school in the Royal Borough. It was there that I would hone my understanding and skills of special education.

My move to Thailand some 20 years ago was influenced by the need for me to better understand what was developing on the International level. In Thailand I aided two large international schools to start and develop their special needs department, both of which currently have heads of the special needs department training to a Masters level by a joint collaboration between The Village and the University of Northampton (UK).

I soon realised that there are many more young people in Thailand who needed support. Students who are struggling at school to learn. The Village was set up as an independent educational centre to cater for this group.

The school has grown from that one student and one room, and today you see a whole range of academic staff and therapists who work together to support the child. They don’t just focus on the child’s difficulties, and instead the child’s strengths are celebrated, and their parents are supported. The Village's aim and vision still remain the same as it was 17 years ago, to “promote inclusion and celebrate diversity”.

Recently The Villagehas had new staff arrive, one of those is Paul Dibbayawan who has come on as a director alongside myself. With Paul’s help and support, I have high hopes and aspirations for the next decade to come.